How are Indigenous Standards Made?

Standards are fundamental to facilitating international trade and help businesses and organisations grow, innovate and compete in the global marketplace.  Standards can also be referenced by government when formulating legislation.  Over 40,000 standards have been published by NSAI since 1999, with an average of almost 2,000 published each year.  A portion of these are developed at European level following a standardization request (mandate) from the European Commission.  These particular standards must be adopted by each European country and any conflicting national standards must be withdrawn.

Standard specifications (standards) can also be developed within Ireland and are known as indigenous standards.  This process begins when a market player such as an industry representative, consumer, manufacturer, or existing NSAI standards committee etc. proposes an area that would be benefitted by standardisation.  NSAI will then assess the proposal and if approved the work may be assigned to an already existing technical committee/body, or a technical body will be formed of voluntary experts within the appropriate industry.  The role of this committee is to draft a new standard or revise an existing standard, a process that can last between a few months to 3 years. This is a process that is consultative and consensus-driven.

NOTE: NSAI deliverables include Irish Standard (I.S.), Standard Recommendation (S.R.) and SWiFT. The process for development varies to suit the type of deliverable.

Once the document has been completed by this NSAI expert committee it will be submitted for a public enquiry which is open to all for comment through the online portal NSAI Your Standards, Your Say.  This means that all interested parties receive an opportunity to contribute and participate in any standardisation work being carried out by NSAI.  The committee analyse all submitted comments received and changes will be made to the draft document as agreed following consensus from members.  The standard then follows a validation process before being published by NSAI and made available to purchase on the NSAI Standard Sales website in pdf or hardcopy format.

Many of these standards will be subject to continual review and revision as technology and research continues to develop, and to reflect current best practices.  A standard, whether it is voluntary or mandatory, is a collaboratively created tool that sets benchmarks which help maintain high levels of quality, safety, efficiency, and environmental consideration throughout the sector it contributes to.

The graphic below outlines the development stages of a standard. 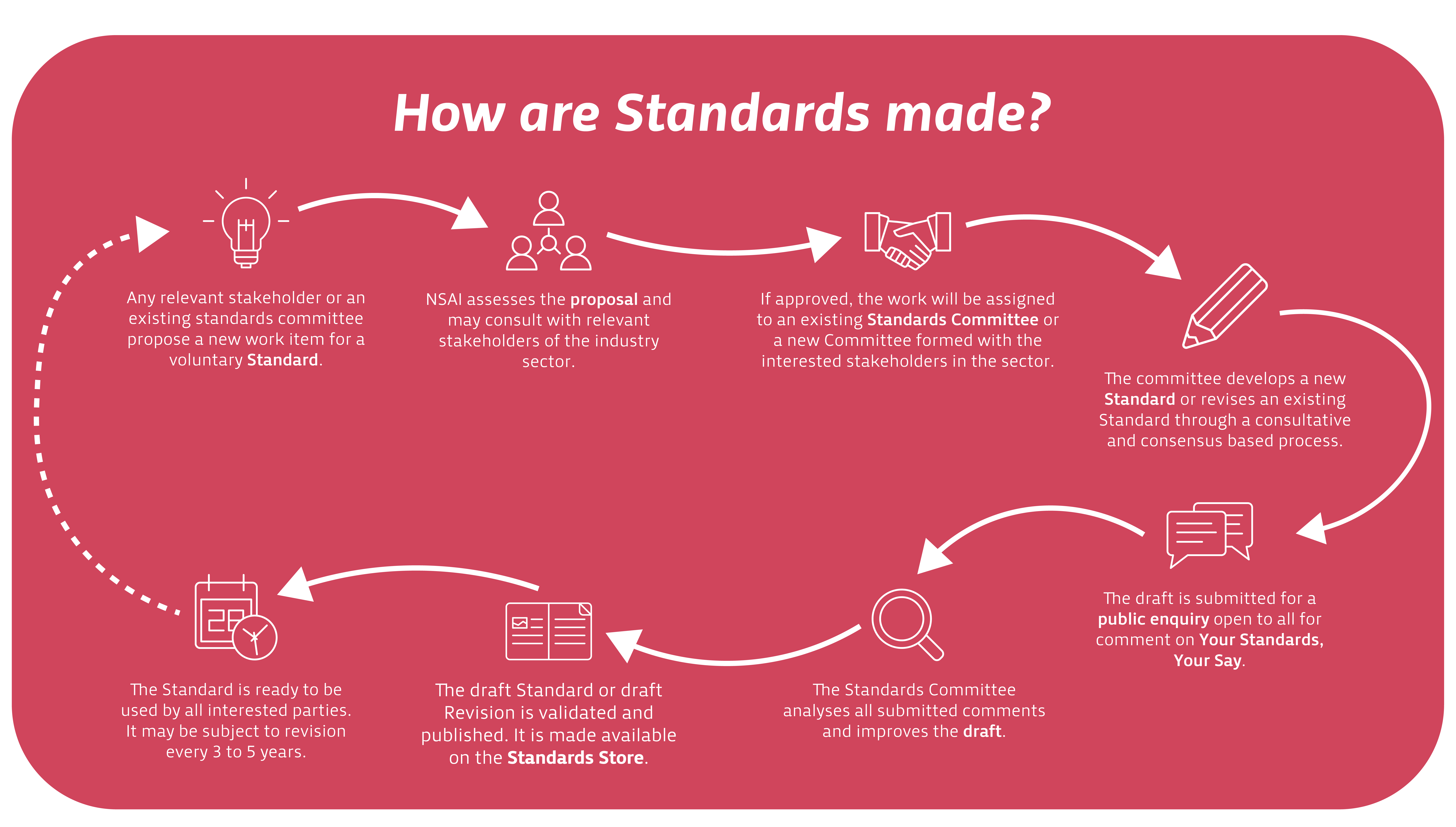 Return to learn more about What are Standards?