A Redefinition That Was Worth the Weight

The NSAI’s National Metrology Laboratory is today commemorating the historic Kilogram redefinition by unveiling a specially commissioned ‘SI Unit’ sculpture at its base in Glasnevin.

History was made on the 16th November 2018 when Metrologists and policy makers from 60 nations around the world convened in Paris and agreed to redefine a kilogram in terms of a tiny but unchanging value called the “Planck constant". This 'electronic kilogram' will be the new baseline measure of mass and will come into effect on May 21st of this year.

Since 1889, the kilogram has been defined by a piece of metal held in a triple-locked vault in the International Bureau of Weights and Measures laboratory in France. It is the one true kilogram in the world. Several exact copies were made and placed in national metrology laboratories around the world to calibrate measurements in their own countries.

Ireland’s copy of the kilogram resides in the National Metrology Laboratory in Glasnevin which is run by the National Standards Authority of Ireland (NSAI), an agency of the Department of Business, Enterprise and Innovation.

The specially made stone sculpture being unveiled today has been embossed on both sides with the SI symbol. The stone originally formed part of a length measuring standard which was used in the National Metrology Laboratory for over 25 years. It now stands proudly on the lawn outside the main entrance to the building. 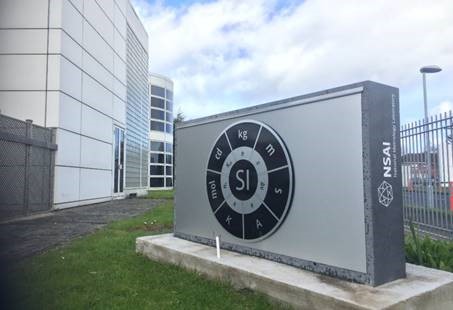 “This new definition will stand the test of time and will boost the accuracy of scientific measurements. It is the biggest change to the fundamentals of measurement in over 100 years” said Minister Breen.

“I am delighted to see first-hand the work of NSAI’s National Metrology Laboratory in developing and maintaining national measurement standards. We all rely on accurate measurement to some extent in everyday life. Consumer protection, fair trading and quality and efficiency in manufacturing are all dependent on trust in measuring instruments and systems, and NSAI helps lay the foundation for that trust.

“National metrology is indeed just one aspect of NSAI’s work. This also encompasses the development and publication of national standards, with NSAI at the forefront of global standards development in emerging areas such as Artificial Intelligence. In addition, NSAI’s broad remit extends to legal metrology and the certification of products and services.

“I would like to commend NSAI for the excellent work it has done in assisting Irish industry to prepare for Brexit. It has hosted a series of well-attended Brexit information events over the past few months throughout the country, and has also produced a range of useful Brexit factsheets that businesses in specific sectors can consult for further information.

“At a wider level, the Government has put in place a suite of complementary supports to help businesses address their Brexit challenges. Businesses should consult the Government’s Getting Ireland Brexit Ready webpage for more information”.

Also speaking at the event, NSAI’s Chief Executive Geraldine Larkin said the redefinition of the kilogram is significant.

“Scientists expect this change will spur technological innovation and lower the cost of many high-tech manufacturing processes. For computer and mobile device manufacturers, to ship building and medical devices production, this is a significant step into the future,” she said.